Posted By : VLF
Comments : Off

Auto Net, the Woodland Hills, California used car dealership has been named as a defendant in a lawsuit filed by the Vachon Law Firm. The case is titled Mandegar v. Auto Net, et al. and is being heard by the Los Angeles County Superior Court (Case No. LC100323).

The Plaintiff is the Mandegar v. Auto Net lawsuit is an Orange County, California consumer who purchased a used 2009 BMW 328i from Auto Net in March 2013. On November 6, 2013, the Plaintiff filed a Second Amended Complaint (the “Complaint”) in the lawsuit alleging that Auto Net had advertised the BMW as being in “immaculate” condition and expressly told Plaintiff that the automobile had not previously been in accidents. However, the Complaint goes on to allege that the Plaintiff soon learned that the BMW 328i had previously been in a serious accident in which it sustained frame damage.

Based on these allegations the Complaint asserts causes of action against Auto Net for common law fraud, breach of implied warranty (imposed by California’s lemon law statute), and violation of California’s Consumers Legal Remedies Act.

Click below to read a copy of the Complaint against Auto Net. 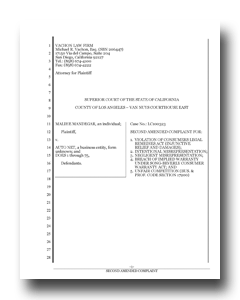 Please remember: the mere filing of a lawsuit does not mean that the allegations in the complaint are true. The Court in the Mandegar v. Auto Net lawsuit has not yet issued any rulings on whether the Complaint’s allegations are true or whether or not Auto Net committed any illegal conduct.

The Vachon Law Firm is currently looking for and attempting to contact other Auto Net customers who may have purchased accident-damaged vehicles. If you purchased a used car from Auto Net and suspect or know that it was previously in an undisclosed accident, then please call the Vachon Law Firm immediately at 1-855-4-LEMON-LAW (1-855-453-6665). You can also contact us via email.

By calling you may provide valuable information in the Auto Net lawsuit. You might even find out that you too are entitled to a refund or other legal or equitable relief!

Material herein is solely for investigation and information purposes. Prior to taking any action, a consumer's first step should always be to consult with a qualified attorney. In California, there are many attorneys who specialize in lemon law and auto fraud law firms (including this one) that provide free consultations. A consumer should obtain such a consultation before doing anything that could affect their legal rights. This website does not create an attorney-client relationship with persons who view it. This Website is intended solely for California residents. The information herein does not apply to any other jurisdiction.

SEND US AN EMAIL